DDoS attacks are increasing in scope and complexity, threatening to overwhelm the internal resources of organizations around the world. These attacks combine high-volume traffic with slow, low-key, application-targeted stealth techniques. To prevent DDoS attacks from reaching the corporate network, organizations need a hybrid cloud-based mitigation solution in addition to on-premises protection.

F5® Silverline® DDoS Protection is a service delivered through F5 Silverline’s cloud-based platform. Detects and mitigate DDoS attacks in real-time with industry-leading DDoS mitigation bandwidth to prevent even the largest volumetric DDoS attacks from reaching your network. F5 security experts are available 24/7 to keep your business online during a DDoS attack with comprehensive protection against L3-L7 layered DDoS attacks.

DDoS attack is not a problem

Stop DDoS attacks before they reach your corporate network and impact your business with real-time DDoS attack detection and mitigation in the cloud.

Protection against All DDoS Attack Vectors

Licensed F5 Silverline DDoS protection is designed to respond to the growing threats, scale and complexity of DDoS attacks and provides multi-layered L3-L7 DDoS attack protection against all attack vectors.

The F5 Customer Portal provides transparent attack mitigation visibility and reports before, during and after an attack.

The licensed F5 offers comprehensive DDoS protection both on-premises and with the cloud-based Silverline platform for application services.

F5 is the first leading application services company to offer a hybrid solution for DDoS protection. By implementing Silverline DDoS Protection on top of the on-premises solution, customers can keep their businesses online when exposed to a DDoS attack, with reduced risk of downtime, real-time DDoS mitigation response times, unparalleled visibility and reporting, and cost efficiencies. The on-premises DDoS protection solution and Silverline DDoS Protection can be deployed independently or together as a hybrid solution for the most comprehensive L3-L7 DDoS protection. 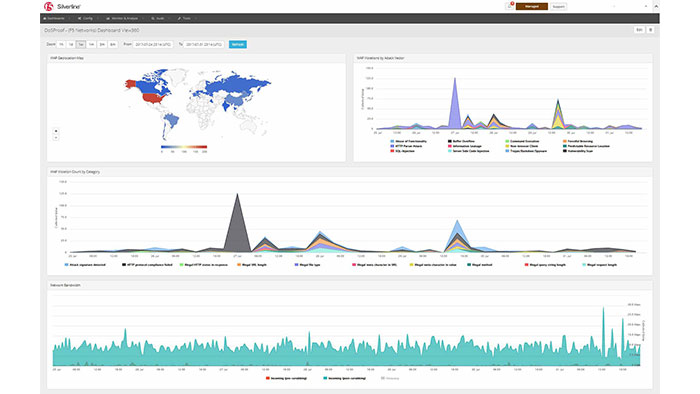 Any business serving content or applications over the Internet can use cloud-based DDoS protection to keep their business online during an attack with minimal impact on users. Designed to respond to the growing threats, scale and complexity of DDoS attacks, Silverline DDoS Protection provides multi-layered L3-L7 protection against all attack vectors.

Silverline Cloud Cleaning Centers are built with industry-leading security and open-source technologies to detect, identify and mitigate threats in real-time and return clean traffic to your website. With the breadth of the most advanced security hardware, software, rules engines, and custom tools, Silverline DDoS Protection provides in-depth analysis and mitigation of multi-layered attacks unachievable with other scrubbing services that use a single vendor technology architecture. Silverline DDoS Protection can run continuously to monitor all traffic and prevent attacks from reaching your network, or it can be launched on-demand when your site is under a DDoS attack.

As traffic enters the F5 debugging center, it is routed and broken down into a “suspect spectrum”. F5 then determines the best scrubbing techniques for each traffic segment and automatically routes traffic through cloud scrubbing centers for real-time mitigation. Traffic continues to be punctured as it passes through the debugging center to confirm that malicious traffic has been completely removed. The clean traffic is then returned to your website with little to no end-user impact.

The F5’s globally distributed, fully redundant data centers and cleanup centers are equipped with advanced systems and tools designed to deal with the growing threats, scope and complexity of DDoS attacks. Silverline DDoS Protection provides multi-terabit attack protection to protect your business from even the largest DDoS attacks. The licensed F5 Silverline DDoS Protection works directly with three Tier 1 carriers to ensure bandwidth is not shared or based on peering agreements like other cloud-based services.

This includes Layer 2 VPN (L2VPN) technology, which allows high-traffic websites to take advantage of protection without sacrificing user experience. Only a fraction of the bandwidth is required to process inbound traffic, ensuring normal traffic delivery to your users with the lowest false positive rate and maximum throughput. Depending on your needs, clean traffic can be returned to your site via GRE tunnel, proxy, L2VPN, or connect through Equinix Cloud Exchange.