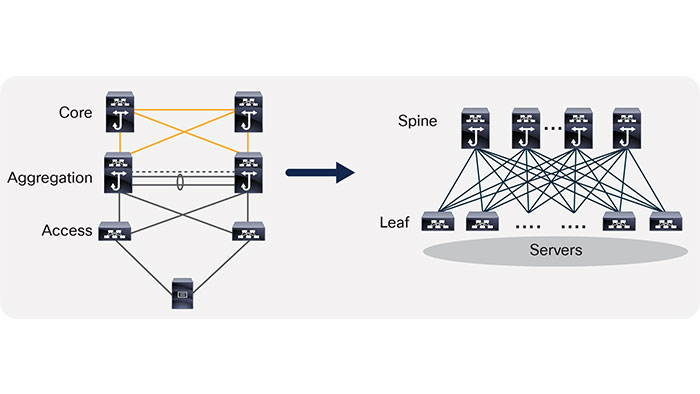 The Cisco Nexus 9k enables ACI leaf-spine architecture and NX-OS VXLAN Fabrics with diverse modular and fixed portfolio. However, it can only run in on these modes as it is mutually exclusive. One mode of operation on the Nexus 9000 is enhanced NX-OS and it is pretty much like the equivalent of other Nexus series. This mode supports vast range of features like we all familiar with such as vPC, spanning-tree, routing protocols and etc. Another mode that Nexus 9k can operate on, is ACI mode. ACI mode in Nexus 9K series relies on spine and leaf architecture which is replacement for traditional three-tier layer network. In this architecture network layers separate in two different layer: Spine layer and Leaf layer. Spine layer is equivalent to the core layer in old model and it is responsible for routing between the leaves. In the other hand, leaf layer is like former access layer and it will be connected by 40G links to the spine layer and 1/10G to clients. Also leaf switches are responsible for most network processes such as QoS and applying ACLs. Moreover, in spine-and-leaf architecture it is not allowed to have inter-leaf or inter-spine connection.

You can convert any Cisco Nexus 9000 Series switch from Cisco NX-OS to ACI boot mode except Cisco Nexus 3164Q or 31128PQ switch.

The following Nexus 9300 switches are recommended to be applied as Leaf switch in this architecture:

The following Nexus 9700 modular switches are recommended to be applied as Leaf switch in this architecture:

Also the N9K-X9336PQ switch can be deployed as a fixed spine switch. 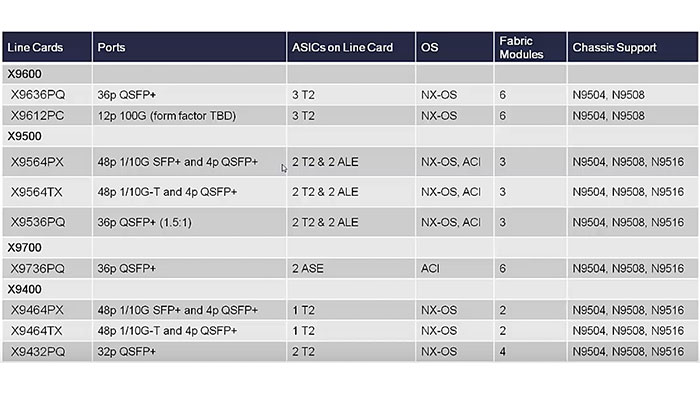