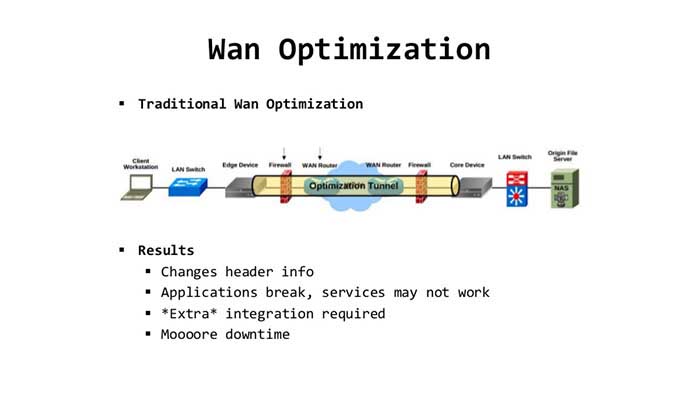 wouldn’t you like to know how Riverbed SteelHead™ WAN optimization works? In many ways SteelHead is a set-and-forget technology. Setup is easy and fast — as little as 15 minutes in many cases — and then they efficiently work their magic in the background without much IT involvement.

But how do these WAN-optimization workhorses accomplish so much with so little of your own effort? In short, how does WAN optimization work? A little understanding may help you optimize your network even more.

Latency: This is the back-and-forth time resulting from chatty applications and protocols, made worse by distance over the WAN. One server sends packets, asks if the other server received it, the other server answers, and back and forth they go. This type of repeated communications can happen 2,000 to 3,000 times just to send a single 60MB Microsoft PowerPoint file. A somewhat simple transaction can introduce latency from 20 ms to 1,200 ms per single file transaction.

How SteelHead overcomes these problems

SteelHead is a bookend technology in which one Steelhead sits at the data center and another at the edge. SteelHead works with any WAN because it sits behind routers, which terminate the WAN at each end. The worse the WAN performance and the further the distance between the locations they connect, the bigger the effect SteelHead WAN optimization has on performance.

The bookended SteelHead analyzes each packet as it goes on and off the routers. From this point, the Riverbed Optimization System (RiOS®), the software that powers SteelHead, utilizes a combination of three technologies to boost WAN performance.

Don’t resend redundant data: A process known as data de-duplication removes bytes from the WAN. Data that is accessed repeatedly by users over the WAN is not repeatedly resent. Instead, small 16-byte references are sent to let SteelHead know that this data has already been sent and can be reassembled locally. Once sent, this data never needs to be sent again.

Scalable data referencing looks at data packets: Let’s say a user downloads a document from a file server. At the sending and receiving locations, SteelHead sees the file and breaks the document into packets and stores them. Then the user modifies the document and emails it back to 10 colleagues at the file’s original location. In this case the only data sent over the WAN are the small changes made to the document and the 16-byte references that tells the SteelHead device at the other end how to reassemble the document.

SteelHead cares about data: Data is data to SteelHead, no matter what format or application it comes from. That means far less of it needs to be sent across the WAN. As an example, imagine how many times the words “the” and “a” appear in files from various applications. SteelHead doesn’t care; these bytes look the same and therefore need not be sent. This type of de-duplication can remove 65–95% of bytes from being transmitted over the WAN.

The fastest round trip is the one you never make: Transport streamlining makes TCP more efficient, which means fewer round trips and data per trip. For example, traditional TCP does what’s known as a “slow start process,” where it sends information in small chunks and keeps sending increasingly larger chunks until the receiving server can’t handle the chunk size. Then it starts again back at square one and repeats the process. Transport streamlining avoids the restart and just looks for the optimal packet size and sends packets only in that size.

Combine data streamlining with transport streamlining for staggering WAN efficiency: Thanks to transport streamlining you’ll be making fewer round trips (up to 98% reduction), and you’ll be sending more data per trip. This adds up to a much higher throughput. But it’s bigger than that because a single packet can virtually carry megabytes of data by repacking the payload with 16-byte references as opposed to repetitive data.

Lastly, application streamlining is specially tuned for a growing list of application protocols including CIFS, HTTP, HTTPS, MAPI, NFS, and SQL. These specific modules understand the chattiness of each protocol and work to keep the conversation on the LAN, where chattiness is not a factor and therefore creates no latency, before making transmissions over the WAN.

There you have it, how WAN optimization works at its most elemental. And your end users really notice, instantly. For more details watch this informative video: How WAN Optimization Works.